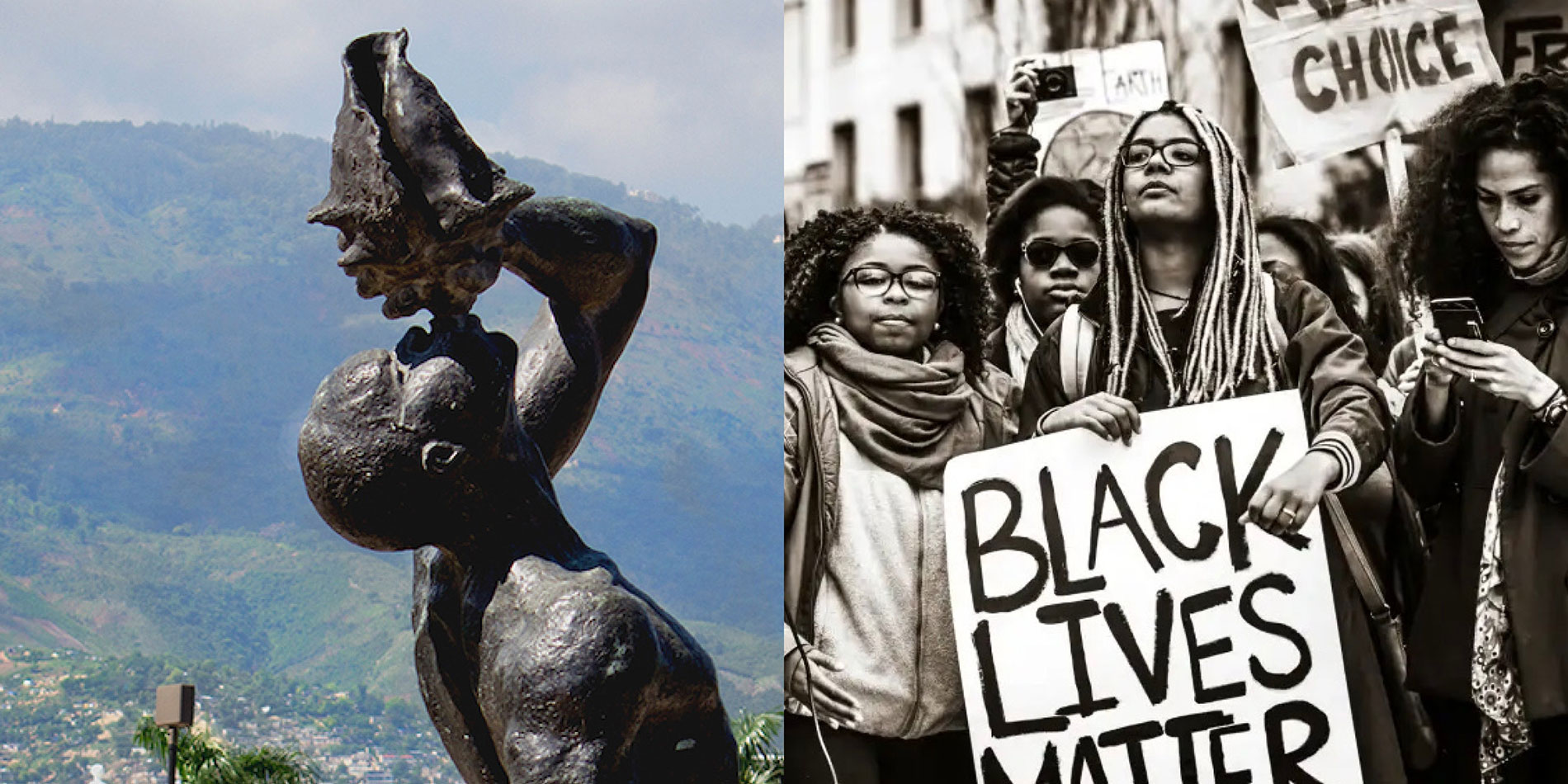 WHAT IS THE Center for the Study of Slavery and Justice (CSSJ)?

The CSSJ is a scholarly research unit with a public humanities mission. Recognizing that racial and chattel slavery were central to the historical formation of the Americas and the modern world, CSSJ creates a space for the interdisciplinary study of the historical forms of slavery while also examining how these legacies shape our contemporary world. CSSJ has various research clusters and public humanities projects. We offer numerous seminars, reading groups, and working groups for faculty and students at Brown. The CSSJ also offers Slavery and Legacies Walking Tours and a Civil Rights Movement Initiative. These initiatives enhance students’ understanding of slavery in Rhode Island, the Civil Rights Movement, and their legacies in the present.

ALTHOUGH YOU ARE PART OF BROWN UNIVERSITY,  THIS “TEXTBOOK PROJECT” SERVES A DIFFERENT AUDIENCE. WHERE DID THE IDEA FOR THE CSSJ TEXTBOOK PROJECT COME FROM?

Given the commitment of the CSSJ to public history, we always felt that there was the necessity for a different curriculum about the history of racial slavery particularly since it was foundational to the history of the making of the Americas. In 2018 in discussion with CSSJ board member Mary Vascellaro, we agreed to embark on a curriculum project for high school students, the end result being the publication of Racial Slavery in the Americas: Resistance, Freedom, and Legacies. This board member funded the project. For this we express our deepest appreciation.

CAN YOU SPEAK ABOUT WHAT WENT INTO THE MAKING OF THE CURRICULUM?

For this project in particular, the Center was very much interested in flipping the hierarchy of knowledge production and the ways we conventionally write history. We first consulted with students followed by teachers and scholars to inform this curriculum unit. Our very first workshop in December 2018 convened public high school students from three different school districts in the state of Rhode Island. This project became even more critical and timely following the 2019 report compiled by Johns Hopkins Institute for Education Policy which deemed Providence Public Schools as “failing.” As a center at a university in this same city it was imperative that we produced something that could respond to this moment and create a resource for both students and teachers. Students who participated came with a wealth of knowledge and by creating space for students to engage with young and emerging scholars on Brown’s campus, the workshop provided insight into gaps of knowledge and informed the project in meaningful ways.

It was important for the Center to also meet with teachers from a variety of settings to garner their feedback. A small group of teachers met on the campus in summer 2019. They participated in small group discussions and also heard from professors and graduate students, just as the students did. The teachers visited the John Carter Brown Library where they examined items related to the transatlantic slave trade including the account book from the slave ship Sally, which was owned by the Brown brothers. Teachers were also provided with the Center’s Slavery & Legacy Walking Tour to help them think about placemaking and memorialization in the context of Providence, and imagine what that may look like in their cities or towns. Our workshop with teachers really helped both the CSSJ and Choices Program understand the needs of students as well as the resources teachers required to engage students in very difficult conversations about racial slavery and its legacies.

The Choices Program was started over 30 years ago at Brown University by a local teacher who saw the value of bringing academic scholarship on contested issues to a secondary school audience. From that initial idea came the first curriculum unit ever produced by the Choices Program, which was called U.S.- Soviet Relations. That unit has been updated several times and is now called Russia’s Transformation, but at its core it still gives high school students a window into scholarly-based, multiple perspectives on U.S.-Russia relations, and ultimately asks them to formulate and defend their own views on the topic.

Choices offered its first historical unit in 1992 with Origins of the Cold War. The Program has grown over the years to nearly 40 curriculum titles that explore a variety of contested U.S. History, World History, and Current Issues topics. In 2018, it became a project of Brown’s History Department and will be releasing several new History units in the coming years.

We are lucky to have the Choices Program as part of Brown University, because they have years of experience writing for a secondary school audience. The Choices Program is unique in that it works with scholars—four from Brown were involved in this unit—and translates their research into curricular materials that are accessible to secondary students.  Equally as important, the Choices Program has a robust schedule of professional development offerings around the globe and an extensive mailing list and social media presence.  All of these play an important role in promoting Choices curricular offerings and their approach to addressing contested historical and contemporary issues.

YOU MENTION THAT THE CHOICES PROGRAM PRODUCES CURRICULUM UNITS, NOT TEXTBOOKS. SO RACIAL SLAVERY ISN’T REALLY A TEXTBOOK?

Correct. Although this is the longest curriculum unit ever produced by the Choices Program, Choices does not produce textbooks. The Choices Program produces supplemental curriculum, which includes student readings, lessons, and videos for 10+ days of instruction. Again, since this unit is more extensive than any other unit, it probably contains enough material for teachers to use it for a few weeks! As is true for all Choices units, teachers can pick and choose to use only the parts that meet their classroom goals.

The Racial Slavery in the Americas curriculum includes readings and lessons on the human geography of the transatlantic slave trade and on data, primary source, and art analysis. It also deals with the issues of reparative justice; Juneteenth; public memorials; and more. The unit is supplemented by dozens of short videos with top scholars who address questions such as: Why should we use the term “enslaved people” instead of “slaves”? What are the legacies of racial slavery? What  does justice look like for those affected by slavery?

HOW DOES THIS CURRICULUM DIFFER FROM THE 1619 PROJECT AND ACCOMPANYING LESSONS PRODUCED BY THE PULITZER CENTER?

When the Center first made the decision to embark on this curriculum project, we wanted to make sure that we were not recreating something that had already been done and that we were producing something new. We also knew it was incredibly important to have  this unit go beyond the narrative of slavery in the United States and to center the voices of those enslaved. It was imperative that resistance was a part of the story we told. Racial Slavery in the Americas: Resistance, Freedom, and Legacies does just that. By telling a more global story of racial slavery we are able to weave together stories from places that sometimes are seen as not connected at all. In this project we told a story about the making of the Americas. This is important. Many students today come from other parts of the Americas where there was racial slavery. In today’s world we need to connect the historical dots of what was a global system as one way to understand the world. This curriculum unit is an opportunity for students to see that the legacies of this history binds us beyond borders, whether that student is from Providence, RI, or any other part of the USA, Dominican Republic, Haiti, or Brazil.

ULTIMATELY, WHAT DO YOU HOPE HIGH SCHOOL STUDENTS WILL TAKE FROM THIS CURRICULUM?

The history of racial slavery spans over 400 years. It shaped not only the Atlantic World but the history of many countries in Europe and Africa. That is a lot of ground for one curriculum unit to cover! We hope that the curriculum will provide an introduction to the different ways in which racial slavery shaped the modern world. We hope it provides teachers, and their students, with access to the wide variety of experiences of enslaved peoples in North America, South America, and the Caribbean. It is essential that society examines the legacies of racial slavery as the afterlife of this social system remains with us today shaping the structures of our societies. Finally, we hope it sparks in students ideas and informed discussions about what should be done to address the past and present effects of systemic racism.

Note: The Racial Slavery in the Americas: Resistance, Freedom, and Legacies curriculum is available for free from the Choices Program in a Digital Editions format until September 30, 2021, thanks to funding from CSSJ. A print copy of the unit is available for $43 plus shipping. Bulk pricing is available. Visit www.choices.edu or email Mimi_Stephens@brown.edu to learn more.